This weekend I have been concentrating on perfecting the Skinner blend technique. I have also made two brooches using this technique. 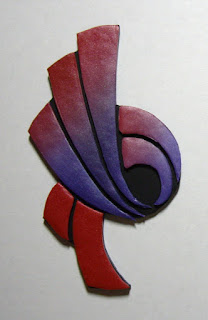 In progress
The first one is made from a Skinner blend of custom mixed red and purple. I cut the individual pieces from the raw clay that had been rolled out on the #4 setting on my Polyclay Roller (pasta machine). Once they had been baked and cooled, I laid them over the original paper design I had drawn and found I needed to trim some of the pieces, so they fitted together precisely. I then pressed the individual pieces into a sheet of rolled black polymer clay, leaving a small gap between them, trimmed around the outer edges and re-baked it.

The brooch still needs finishing but I like the ‘mosaic-style’ effect, without the mess of grouting between the pieces. I also learnt from my first attempt at this style that the ‘mosaic’ pieces do not have to be very thick, as they really just press onto the surface of the underlying clay, rather than sink into it. The polymer clay trimmed really easily with a scalpel and scissors at this #4 thickness, which gave me an idea that I tried by making a second brooch. 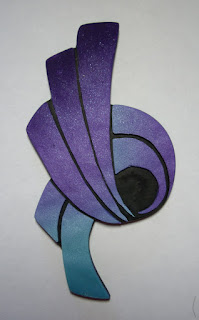 In progress
My second brooch, using the same design, is made from a Skinner blend of custom mixed purple and turquoise. This time I baked the complete sheet I had made of this Skinner blend. When it was cool, I cut out the individual pieces for the design, from selected areas of the sheet. It was much easier to cut precise shapes doing it this way (as when cutting the clay raw, the slightest amount of unintentional pressure can distort the shape slightly, when working on such a small scale).

As before, I pressed the individual pieces into a sheet of rolled black polymer clay, leaving a small gap between them, trimmed around the outer edges and re-baked it. I feel I have achieved a better flow of colours in the design on this second brooch. Having the sheet already baked, you can move a template around until you are happy with a selected area of colour, with out worrying about getting finger prints or marks on the surface.

Certainly for making ‘mosaic-style’ brooches, this latter method would be better. I could pre-bake different coloured/patterned sheets to be cut up at a later date – as this would not be messy or need immediate baking, it is possibly something I could do at my desk, before I start work in the mornings. Also, as the clay is already baked, I do not have to worry about doing something with the left over pieces, they will just save for use at another time.

It was just this need to do something with some left over unbaked clay, which lead to me creating this sheet. 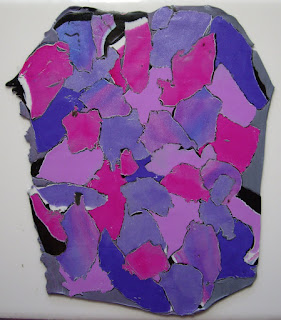 I thought I would try the ‘torn paper’ technique, except it was quite a while ago that I had read how to do it and halfway through, I realised that I had rolled the white layer out too thin, so you cannot really see it. I still like the effect though, in fact, I think I will use it as a new background for my blog title. It was good fun to do, so I will have to find and read the instructions and try it again sometime.
Posted by Claire Fairweather at Sunday, April 25, 2010

I am a polymer clay artist and designer, specialising in contemporary mosaic art, using my own handmade polymer clay tiles. Based in Whangamata (weekends) and Auckland (weekdays), New Zealand.