When I look back at the plans I had for 2013, some have been more successful than others.


1.    Re-establish a monthly market spot – maybe the Devonport Craft Market or back to Coatesville Market. I started with the Devonport Craft Market for a couple of months, as this was specifically a 'craft' market and only a ferry ride from the city centre for tourists. I hoped it would be better for me than the farmers markets that mainly focus on food, but it did not attract large numbers of visitors. Then I discovered that a new monthly craft market had started in Browns Bay, so I tried that, hoping it would work out for me. It was so handy right on my doorstep and nice to be able to support a local market but after a couple of tries this actually turned out to be the worst market for me in terms of sales. At this point I decided that making lots of small, low cost items to sell at markets was not what I really wanted to do but that I would do the twice yearly Mission Bay markets to sell off old stock. However, the Labour Day Art & Craft Market at Mission Bay was poor  for sales this year and I reluctantly said to my husband that I would not even do that any more, as it was not returning enough to warrant his time as well as my own for the whole day. Although I will miss the customer interaction that I enjoy at markets (hopefully the teaching workshops and the Auckland Polymer Clay Guild will compensate for this), I feel it is now time to aim higher and focus on selling my work through galleries, gallery stores and selected shops.

2.    Exhibit at the Dunkleys Craft Show (North Shore) in October 2013. I had been looking forward to doing this all year but was very disappointed at the number of visitors to the show for all the time, cost and effort. Also the small number of people taking part in the daily workshops and the sign-ups that followed was disappointing. So sadly, I would not do this show again.

3.    Promote polymer clay through slide shows and demonstrations to encourage people to sign up for my workshops. I have not had the chance to pro-actively do as much of this as I would like, mainly due to my time being taken up preparing for teaching workshops and the Dunkleys show - hopefully I can do more of this next year. However, I did set up the Auckland Polymer Clay Guild in August this year (not in my plans!) and I am currently the President of this group.

4.    Expand my range of workshops to include some half day technique focussed sessions e.g. extruding with polymer clay and making canes. I have prepared a number of other workshops and now have five: Introduction to Polymer Clay, Retro Canes, Simple Canes, Polymer Clay Mosaics and Painting with Polymer Clay and am now looking to offer these at other venues, in addition to the Lake House Arts Centre, rather than running them from home. This means I do not have to spend so much time promoting and sorting the administration, which is quite time consuming when I have a limited amount of time.

5.    Complete my “50 clips for 50 years” project to promote CLIPT. This project has not happened as I had intended, in fact it has not happened at all. My original plan was to make one clip a week, illustrating a different technique. Unfortunately work, life, and exhibition, show and teaching deadlines have all taken priority. I would like to think that I will have photographs of the clips that will be featured in this book before my next birthday - but that may be a struggle with everything else that I need to do in the first few months of the new year.
Posted by Claire Fairweather at Tuesday, December 31, 2013 No comments:

I have had very little time to get in the studio lately but today I managed to have a good session. I am currently working on a sculptural piece, which will be one of three pieces, I will be entering in the International Polymer Clay Awards. The closing date for submissions is 20 January, which is not that far off now. I am not sure when I will get to continue working on my sculpture as I have to work all next week and then there is Christmas. Hopefully I will manage to get it completed and photographed in time.
Posted by Claire Fairweather at Friday, December 13, 2013 No comments: 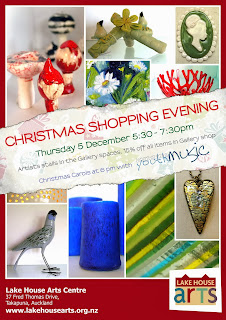 I will have a table at this evening event selling my Fashion Clips, jewellery and other small items, all made from polymer clay, that would make unique gifts for Christmas. Note: the heart-shaped pendant on the poster is one of mine.
Posted by Claire Fairweather at Tuesday, December 03, 2013 No comments: