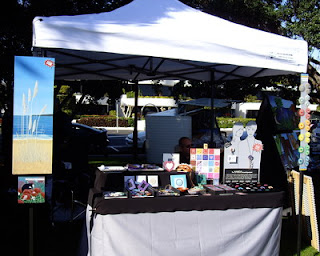 The weather was perfect for this years market but things were pretty quite during the morning - I guess a lot of people were sleeping in after celebrating New Zealand winning the Rugby World Cup last night. Despite the All Blacks Parade around the city centre in the afternoon, a lot more people came to the market later in the day.
I had a wide range of polymer clay items for sale including brooches, HANGAs, artwork and many one-off trial pieces. However, I made a discovery which was rather alarming, for my most recent line of 'beachwear accessories'. The intensity of the sun was so great it caused the sarong buckles, and other thinner items at the front of my table, to get so hot they became extremely soft and flexible (like when they have just come out of the oven).
After pulling the whole table into the shade, the pieces returned to normal once they had cooled down. It was only a nice Spring day, not the height of Summer, but because there is a whole in the ozone layer over New Zealand the suns rays are extra intense. This may put a stop to my range of polymer clay beachwear accessories. I will have to see what happens if I wear the sarong buckles and other items on the beach during the Summer.
Posted by Claire Fairweather at Monday, October 24, 2011 No comments: 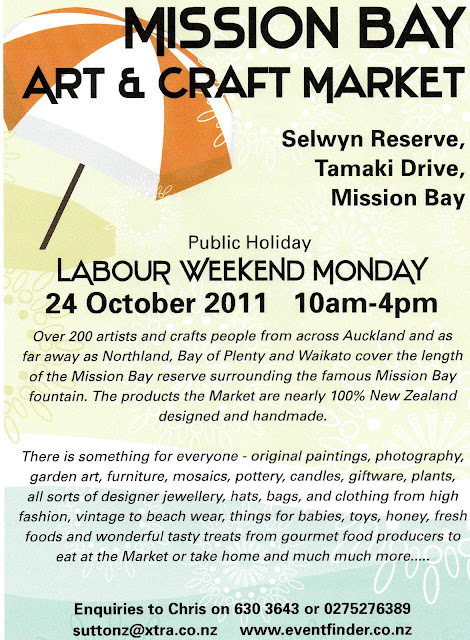 I will be there, on Row 1, selling off a lot of stock at great prices (to make room for new designs) - so, start your Christmas shopping early.
Posted by Claire Fairweather at Tuesday, October 11, 2011 No comments:

Ready for Summer (in the Southern Hemisphere) 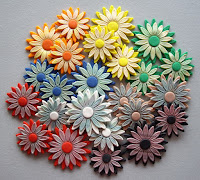 Ready for Summer - here are some Flip Flop Clips and larger Beach Clips, which can be used to clip a sarong or to decorate beachwear, a sunhat, beach bag or just be worn in the hair. I am still waiting for my special clip findings to come from the UK, so I hope they arrive in time for these to be completed for the forthcoming Art & Craft Market at Mission Bay.﻿
Posted by Claire Fairweather at Tuesday, October 11, 2011 No comments:

This is my artifical garden of succulent type plants and pebbles, made from polymer clay - the fun thing is that it glows in the dark...

Creations from clearing my cupboards

I have not posted for a while because I have been busy making and gaining more experience. As the Mission Bay Art and Craft Market it coming up towards the end of this month, I thought I would clear my cupboards of all the things I have bought and never got round to trying - hopefully I can then sell them off at the market and other events leading up to Christmas.
Here is a selection of things I have been doing:

I have experimented with Sculpey 'Bake and Bend' clay, as I thought it would be good for making rubbery flowers and other decorations for flip flop clips. I know it is really a childrens clay but I was disappointed that it was so sticky as well as soft. Will not be using it again! Have not photographed these yet, as I am waiting for my supply of shoe clips to arrive, to complete them.

After reading posts on the Clay Polymer Yahoo Group about creating faux rocks and pebbles, I had a little dabble at that. Here is a piece of rolled clay with black pepper inclusions, a couple of pebbles (I think they look more like birds eggs) and a granite effect 'boulder'. I have used them in my 'artifical garden', which is featured in my next post.

I have also made eight more HANGAs that I started a long time ago and never finished. They were trial pieces, heart and diamond/square shaped. I will add photos of these to my HANGA website www.hanga.co.nz

While I may have got a little distracted, trying all these different things, I have really enjoyed myself playing and experimenting - but now I need to get focused on my next 'big idea'.
Posted by Claire Fairweather at Tuesday, October 04, 2011 No comments: