This could have been so good 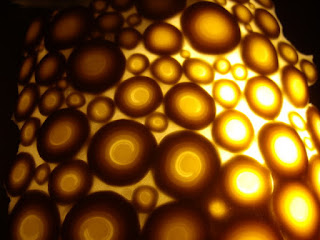 Ever since my return from the IPCA Conference in Malta last year, I have been wanting to create a hollow form with translucent polymer clay, to use as a lampshade for an electric light. My initial experiment, on a small scale, using a polystyrene ball for the form slumped in the last stages of baking. I did not think it was worth pursuing on a larger scale and so I went back to my original idea of creating the shade over a glass form and then removing it when baked. 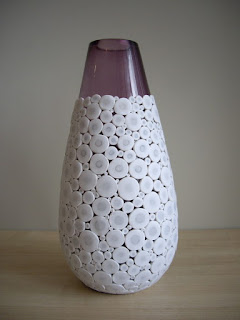 Here I am using a glass vase for the form. I made several different sized jellyroll canes with sheets of skinner blend of white/pearl mix to translucent, rolling the sheet up so the translucent end was in the centre. I then cut lots of thick slices from the canes, about 2mm thick, and covered the glass vase making sure that the cane slices were touching each other. After baking, I filled all the gaps between the slices with polymer clay grout. As I was running out of translucent clay I only used this for the top part, for the rest I used white Premo. I had a brand new block, which was extremely soft, in fact so soft it was easy to use as a grout without the need to mix it with liquid polymer clay. I then baked it all again.
When I held it up to the light, even on the dark purple glass vase, I could see the light coming through the translucent parts and it looked great. So then came the exciting but scary part, removing the polymer from the glass form. Due to the shape of the vase, which I thought would look good as a lampshade I could not prise the polymer off in one piece. So, I decided to cut it down each side, following the shape of the circular canes, so hopefully I could glue the two halves back together with the seams not showing too much. I thought I would do it while it was still warm, so it would be more flexible and easier to remove. 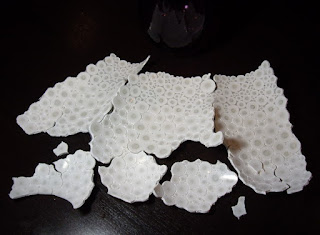 Maybe the thickness was not great enough to support the size of the lampshade, but I would lose the translucency if I made it too thick. Or should I have waited until it was cold and more rigid to remove it from the glass form. Looking at the hours of work and wasted polymer clay lying on the table in front of me, I noticed that where I had used the translucent polymer clay for the grout, it was holding together fine, it seemed like it was where I had used the new packet of white Premo for the grout that it was very weak and brittle (and I had conditioned properly, with some difficulty as it was so soft and sticky). 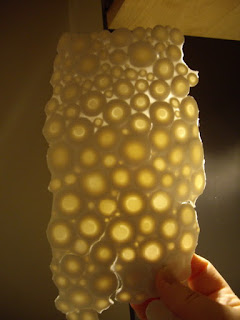 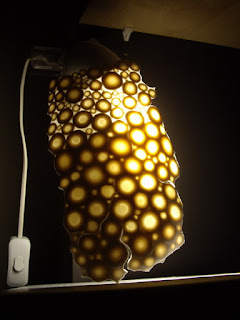 I held some of the pieces up to the light and thought this could have been so good if it had worked. I was planning to use a colour changing light bulb in the lamp base and include it in the July exhibition at Beach Bistro. Maybe I will have another go some time, when I get over the disappointment, but for the moment I will get back working on my mosaic pictures.


Posted by Claire Fairweather at Tuesday, May 05, 2015 No comments: