Here are the results of some more experiements, using the same angular mosaic form that I used in the previous ones. 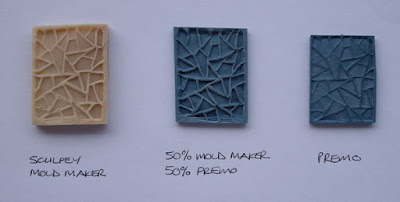 Left: The cream coloured mould was made with Sculpey Mold Maker. I thought this would be better because it was not going to set in about 5 minutes - I could just bake it when I was happy with it. It was so soft and sticky it was impossible to roll very thinly (for creating a texture plate) and too sticky to go through the pasta machine. It also distorted a lot due to the softness of it.

Centre: I then tried mixing 50% Sculpey Mold Maker with 50% Sculpey Premo, thinking that this might stiffen it up a bit. I did manage to roll this a bit thinner but it still distorted quite a bit and again was quite soft to use. When baked it was slightly less rubbery than the pure Mold Maker.

Right: This mould was made with pure Sculpey Premo, which was firmer and but it was hard to press all the way into the thin joints - you can see the relief is less marked - and no good for making a mould to stamp mosaic imprints.

Out of all the materials I have tried, the Gedeo Siligum gave the best results but would be difficult to used for making sizeable moulds of this nature due to its quick setting time.

Posted by Claire Fairweather at Saturday, April 21, 2012 No comments: 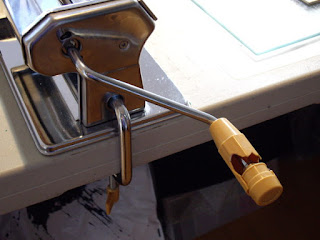 After much use, the grip on the handle of my pasta machine was in a bad way. (A good tip to prevent it from falling out, when in use, is to wrap a piece of masking tape once around the end before inserting it). So I decided to repair it with polymer clay.