I made one of my New Year’s Resolutions for 2017 to 'be proud of my creative artwork' and I think I have managed to achieve this.

This year has resulted in some successful dot mosaic pieces but also the confirmation that as much as I love making them, the time involved does not make them viable to sell (apart from reproduced as greetings cards). So I think the dot mosaics will have to remain as a hobby.

I have also been developing my idea for Swirl-StoNZ, as a New Zealand made souvenir/gift in the lower cost bracket, so I can get back into doing some craft markets, which I have missed. After much practicing to master the technique, I had built up some stock and made some display panels ready to launch Swirl-StoNZ by Claire, at the Labour Day Art and Craft Market at Mission Bay, on 23 October 2017.

Disappointingly, this event was cancelled due to the bad weather so, I had to wait until the Christmas Art Markets at the Estuary Art Centre at the beginning of December. This was my first proper event selling and demonstrating how I make the Swirl-StoNZ (apart from selling a necklace and earrings set in an exhibition at the Estuary Art Centre and a few small pendants in their gallery shop).

The Christmas Art Markets turned out to be a big success, helped by a feature in the Hibiscus Matters local newspaper. The newspaper article had a photograph of a bowl of Glow-in-the-dark Swirl-StoNZ, which I had made for the Mission Bay event to attract children to my stall. These were so popular they sold out in the first hour. People came specifically because they had seen them in the newspaper. Consequently, I spent the next week making another batch of Glow-in-the-dark Swirl-StoNZ (discovering in the process that making my own glow-in-the-dark polymer clay was better than the manufacturers), so I could get them into the gallery shop before Christmas, for all those that were disappointed that they had sold out when they came to my stall at the Christmas Art Markets.

For years I have been trying to find something creative I can make that I can turn into a small craft business. I know, from the initial success, that I can build on the Swirl-StoNZ, with several branches on the idea to explore. So, 2018 will definitely be the Year of the Swirl-StoNZ for me.
Posted by Claire Fairweather at Sunday, December 31, 2017 No comments:

I was just about to throw out an old copy of the Rodney Times, when I thought I would flick through it. I was totally taken by surprise when I saw a photo of myself, demonstrating how I make my Swirl-StoNZ. It was taken at the Christmas Art Market at the Estuary Art Centre on Sunday 3 December. I had no idea the photo was being taken but it is good to see the crowd of onlookers fascinated by the process. 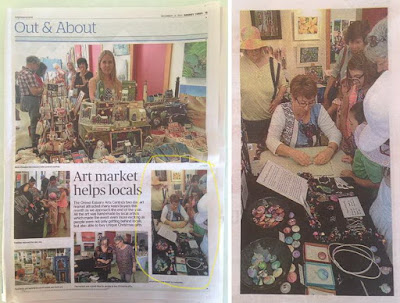 Posted by Claire Fairweather at Friday, December 15, 2017 No comments:

Posted by Claire Fairweather at Sunday, December 10, 2017 No comments: 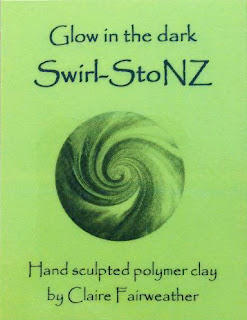 I know a lot of people were disappointed that the glow-in-the-dark Swirl-StoNZ, featured in the local newspaper, were sold out when they came to the recent Christmas Art Markets at the Estuary Art Centre. These glow-in-the-dark (GITD) Swirl-StoNZ were so popular, they sold out within the first hour, mainly bought as 'stocking fillers'.

I have unsuccessfully tried to find some more suitable GITD polymer clay locally, as there is no time to order it from overseas and get more made before Christmas. So, I have been experimenting with making my own.

Thanks to Ginger Davis Allman of www.thebluebottletree.com for her article about DIY glow-in-the-dark polymer clay. Luckily I had a small quantity of the GITD powder, which when mixed with translucent polymer clay makes it glow in the dark. It is actually brighter and longer lasting than the manufacturers versions of GITD polymer clay.

So this weekend, I am making a second batch of GITD Swirl-StoNZ, which will all go to the gallery shop at the Estuary Art Centre on Tuesday morning. I will definitely be ordering some more of this GITD powder, so I can make my own GITD polymer clay for use in the future.

Posted by Claire Fairweather at Saturday, December 09, 2017 No comments: