This is when I usually review the past year but this year I do not feel like I have accomplished much. Moving home at the beginning of the year took a few months out of my creative time. Four polymer clay workshops at the Estuary Arts Centre were all cancelled due to lack of interest, I had to close the Auckland  Polymer Clay Guild due to lack of participating members, and a few ideas/experiments did not amount to anything. Also, I have tried very hard not to be obsessive and spending every spare minute creating. So all in all it has been a rather depressing year in terms of promoting polymer clay and creating with it.

However, on a more positive note, I have continued with my dot mosaics and received a lot of encouraging comments on the few pieces I have shown, winning the People's Choice award at the Puhoi Art Show and selling a couple of pieces at exhibitions. This year I joined the New Zealand Mosaic Art Organisation (as the APCG no longer exists) and definitely want to continue with the dot mosaics, even if only as a hobby due to the time they take to create.

I do have another 'pocket money' project in the pipeline (Swirl-StoNZ) that needs refining before trialing it in 2017. Maybe this could provide the balance with my dot mosaics, allowing me to create some small items that are profitable to sell, as well as creating the dot mosaic artwork that I am so proud of.

I made one of my New Year's Resolutions for 2017 to 'be proud of my creative artwork', so I must not lose sight of this in the forthcoming year.

Posted by Claire Fairweather at Saturday, December 31, 2016 No comments: 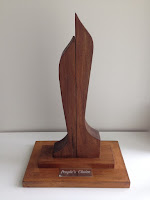 Found out tonight that I won the People’s Choice award at the Puhoi Art Show. I had three entries in the show but I believe it was for my polymer clay mosaic titled ‘Watching the sunrise over Rangitoto’. This news made my evening.

Posted by Claire Fairweather at Tuesday, December 06, 2016 No comments: