My tile in the FIMO 50 World Project 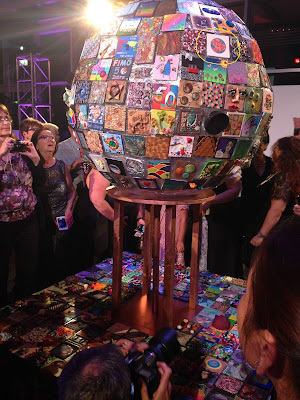 Photos have been released of the THE FIMO 50 WORLD PROJECT. The yellow circle shows the tile I contributed.

This was a collaborative art project, open to polymer artists from around the world, in celebration of FIMO polymer clay being 50 years old. You had to make a 10cm x 10cm (4” x 4”) polymer tile. The submissions were to be displayed on a large framework representing a globe but as you can see, the number of tiles received was way more than the globe could hold. The original idea was that the individual tiles would be auctioned off and the proceeds go to two charity organisations, Samunnat (Nepal) and the Kids Center for Pediatric Therapies (USA). However, Staedtler (the manufacturers of FIMO) have decided to keep the globe together in one piece as a collaborative artwork, and instead will present a generous donation to the two charities. This means the globe can remain a global art piece and will continue in existence as a symbol of unity that links the Polymer Clay Community throughout the world.
Posted by Claire Fairweather at Monday, September 12, 2016

I am a polymer clay artist and designer, specialising in contemporary mosaic art, using my own handmade polymer clay tiles. Based in Whangamata (weekends) and Auckland (weekdays), New Zealand.